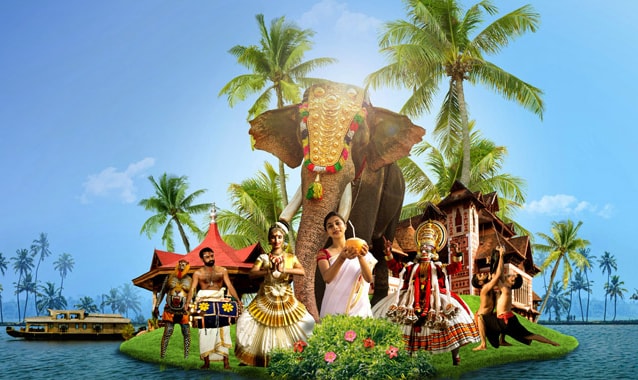 Kerala- God’s own country is the southern state of India. Kerala is the land of natural beauty and greenery or Land of Coconut trees. Kerala is one of the most cultured and peace loving states in India. Kerala is famous for its dance forms, music and art and craft. Kerala has a rich cultural heritage and is influenced by three main religions named Hinduism, Christianity and Islam.

Kerala’s cultural traditions are music, dance forms and sculptures. Several dance forms are originated in Kerala and the most popular is Kathakali Dance form. Kathakali was originated over 300 years ago and it is the combination of dance, music, ritual and drama. It is one of the oldest dance forms of india. Some other famous dances of Kerala are Mohiniyattom, Thullal, Krishnanattom, Koddiyattom, Thiruvathirakali, Oppanna and Chavittunatakom. Songs like Ayyappanpaatu, Kalamezhuthupaatu, Bhandrakalipaatu, Thiruvathirakali, Kolattam and Kummi shows the music culture of Kerala.

The mother tongue of Kerala is Malayalam and it is believed that Parasurama is the creator of Kerala. He converted a portion of sea into land by throwing his axe. The main food of Kerala is rice along with curries of vegetables, fish and eggs. Kerala is also rich in celebrating festivals. Onam is the national festival of Kerala. The state has its own sports culture and folk games.

<-- AJMER - PUSHKAR Cheering things to do in Lake city, Udaipur -->

Thoughts on “Culture Of Kerala”