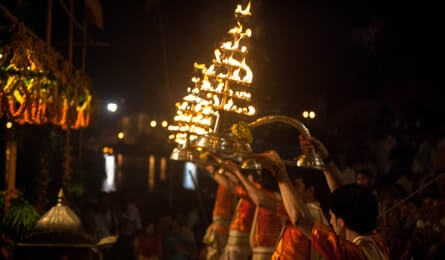 OVERVIEW: Golden Triangle Tour with Varanasi specially designed by Jaipur Car rental and is the spiritual tour in India. Tour connects four cities Delhi, Agra, Jaipur and Varanasi.These cities of Golden Triangle have the most spectacular monuments of the world which reflect the spectrum of the world’s best architecture given by Mughals and Maharajas to India. Varanasi is the spiritual capital of India and it is the place famous for Kashi Vishwanath Temple.

Usually, the trip starts from the capital of the nation, Delhi - it is the perfect blend of rich history and the modern era. Delhi has beautiful attracts that fascinates tourist from all over the India like tallest minaret - Qutub Minar, Raj Ghat - Gandhi's memorial and many others.

Agra located on the banks of Yamuna river the city of love and romance and has one of the 7 wonders of the world that is Taj Mahal - an epitome of love built by almost 20k skilled workers in 22 years.

The third leg is the pink city - Jaipur which perfectly shows the culture and tradition of Rajasthan. Jaipur is popular for the enthralling Elephant ride, magnificent architecture of Amber Fort.

Sarnath in Varanasi the destination where Gautam Buddha gave first time preachings on Dharma after the enlightenment. Varanasi is also popular for the Ganga Aarti at Dasaswamedh Ghat.

With Jaipur Car Rental, grab the opportunity to fill your trip with the colors of historical monuments and spirituality of Varanasi.

You are heartily welcomed at Delhi airport and by our assistance, you will be transferred to your pre-booked hotel. Take rest after a long journey.
Overnight at hotel.

After early breakfast. Exploration of the city begins with the one of the largest mosque in India the Jama Masjid or also known as Masjid-i Jahān-Numā, Raj Ghat - black platform surrounded by eternal flames ( Memorial of Gandhiji) and Chandni Chowk, one of the busiest market. After lunch visit to the magnificent Humayun’s Tomb, tallest minaret Qutub Minar, Parliament House and in the evening India Gate.
Overnight at hotel

After early morning breakfast, drive towards the Pink City. Have lunch in a mid way and continue drive to Jaipur. Reached there, check into the hotel and have rest.
Overnight at the hotel.

Post breakfast, the day starts with the sightseeing of Jaipur. Explore Amber Fort and enjoy the elephant ride, then Jalmahal. Have lunch and visit other attractions of Jaipur which includes the "Palace of Winds - Hawamahal and the city palace. By evening get back to the hotel and have dinner.
Overnight at hotel.

Post breakfast, you will be driven towards the city of Taj and on the way visit Fatehpur Sikri which is also called ”the city of ghost”. Have lunch and then explore the magnificent Fatehpur Sikri fort and Buland darwaza. By evening reach to Agra, check into the hotel and have rest.
Overnight at hotel.

In the early morning when Tajmahal looks too fascinating in the dazzling rays of the sun, explore it and take the pictures. Come back to the hotel and have breakfast. Exploration of the home of heritage sites which are registered by UNESCO. Visit Itmad-Ud-Daula's Tomb and Red Fort. In the late evening take the train to Varanasi.

Early morning reaches Varanasi or sometimes called the spiritual capital of India. Check in to the pre booked hotel and get fresh. After breakfast visit to Kashi Vishwanath Temple and Assi Ghat. Have lunch and visit the Sarnath where Gautam Buddha gave his first lesson on Dharma. In evening enjoy the boating and Ganga Aarti at Dasaswamedh Ghat. Get back to the hotel and have dinner.
Overnight at hotel.

Post breakfast, check out and board flight to Delhi airport to get your connecting flight to home with the long lasting memories of Golden Triangle Tour With Varanasi, with Jaipur Car Rental.


Note: This is a sample itinerary and can be customized according to the priorities of the client.